What's in a Name?

My first name is not unusual, but it's somewhat uncommon. "Patsy" is far less common than "Patty" or even "Pat." Throughout my life it has been a struggle for some to get "Patsy" so I've learned to answer to anything close to it. My dear Aunt LaVerne called me "Patty" until the day she died. I gave up trying to correct her, and she taught me the lesson that there are things far more important than this in life.

At one time I worked at a radio station with someone named "Nancy," and it's amazing how much "Nancy" and "Patsy" sound alike over an intercom. Now I work with a "Patti" and a "Kathy" and this creates some confusion on occasion, too. But, nothing that's insurmountable by any means.

When I worked at Radio Kansas all of the press releases for various events came to me. I kept a collection of misspellings of my name on my bullitin board. I found it quite amusing. "Patsy Farrell," "Patty Jerrell," and one of my favorites, "Nancy Carroll." There were many, many permuations of first and last names, with more spellings than you could imagine.

The funniest one of all was the Wichita Public Library. Periodically I would get a press release from them and they would have changed the spelling of my name. This would happen with no input from me. It was as if it were someone's job to go through their press release list periodically and mix up the letters in the names. I'm sure the real answer is that it was just a new person who was trying to correct an error, and made another one - but it's so much more fanciful to imagine that being someone's responsibility in their idle time. In all the years I worked at the station I don't think they ever got my name right, but they added to my collection of misspellings, and I appreciated that far more. 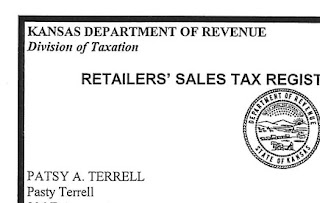 In case you didn't know, "Pasty" is much easier to type than "Patsy." I see that one a lot. And while I might be fair skinned, I like to think I'm not pasty. I guess there could be debate about that. It even says "Pasty Terrell" right under "Patsy Terrell" on my official Kansas retailers tax certificate. I wrote them a note to try and get it corrected, because it is an official document. I'm betting you can guess how well that went. Lets just say I got it in 2007 and it still comments on my skin tone.

As you can probably tell, I don't get too wigged out about my name being misspelled or mispronounced. The last time I was on television they mispronounced my last name, which is not unusual. I say "Tear-ul" - others say "Ter - rel." I answer to either. And I don't correct people in that sort of a circumstance. What's the point?

All of that said, I think it's important to know people's names. I'm not very good with remembering names, so it's a struggle for me. But someone on an art list pointed out to me once that when I talked about people who were working on my house or whatever that I always knew their names. I didn't know this was unusual. These people are in your home, and you're interacting with them, I would think you'd want to know their names. But she pointed out that many people would consider it "beneath" them to have enough contact with anyone working in their house that they would know their names.

She caused me to pay attention to that sort of thing. I'm sorry to say that I think she is correct. Not necessarily in that particular instance, but in multiple ways. People only know the names of people they consider in their "class" and they don't bother to learn others. I try to learn everyone's name, and interact with them on a one-to-one basis, regardless of our "stations." It may take me a few tries, but I'll eventually get it.

So, what's in a name? Sometimes respect is what's in a name. I don't consider it disrespectful when someone mispronounces my name, or has it a little off, or whatever. I find that rather charming. But if I could tell they had no clue what my name was, and I'd been interacting with them for a protracted period of time, I might be put off. Although, people do just have brain lapses sometimes. I've been saved more than once when introducing people and someone's name escaped me and they graciously introduced themselves, saving me the embarrassment.

But if there's someone in your world that you see every day and you don't know their name, learn it today. Just say, "You know, this is weird - we see each other every day - but I don't know your name. If I ever did I have forgotten it, but please share it with me so I can address you by name from now on."

Sometimes what's in a name is the possibility to interact on equal footing.
Posted by Patsy Terrell at 12:56 PM

Enjoyed your adventures with your name. Haven't had much trouble with Pat myself. There are usually quite a group of us Pats that it's easier sometimes to make it a little spiced like 'Trish.' My daughter bemoaned Priscilla's clothing store changed to Patricia's. In her mind that didn't sound very sexy, too mom-ish.

I grew up being called Pat at home but it was always Patsy at school. Maybe that's why I answer to anything close.