My dear, dear friend, Trish Rose, won her bid tonight for District Judge. It has been a battle. Greg took most of these photos, including this one that captured the moment when the celebrating began.

There was much jubilation when she won. You may not be able to tell, but we're all literally jumping up and down. 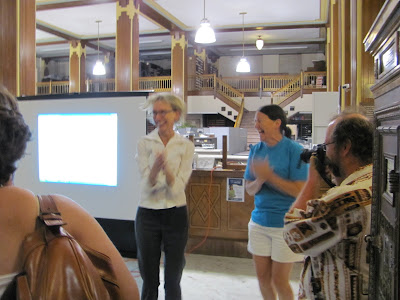 We alternately went from jumping up and down to double checking the results on the screen.

We gathered at the courthouse tonight to watch the returns come in. Periodically we would go downstairs to see how many precincts were yet to be counted. Finally, they told us there was only one precinct left and she had 55% of the vote. 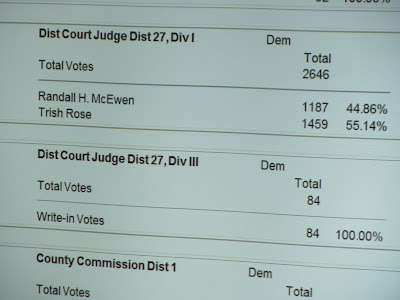 Trish and I have been friends for at least a couple of decades now. She is one of the best human beings on the planet and I'm so thankful the voters recognized that. She's kind and fair - two qualities a person needs to be a good judge.

The newspaper endorsed her opponent saying he was more experienced. I did not agree with that at all. Thank goodness the voters ignored the endorsement, depite her opponent playing it up - as anyone would do.

He's a nice guy, but I wasn't impressed with how he filed at the last minute. Of course, that's perfectly legal and is certainly a strategic move. Nonetheless, I didn't find it very classy - particularly not from someone in the same party that has a pretty small group of involved folks. I suppose if he had been my good friend for 20 years I'd feel differently. And I guess that's how things always shake out.

He was very gracious in congratulating her once it was apparent she had won, and made a quick exit to let us celebrate. I do feel for him and his supporters tonight. It's never easy to lose.

My hat is off to democrats and independents in Reno County who looked beyond the newspaper's endorsement and the letters in the newspaper filled with untruths, and voted for Trish, the person they thought would do the best job.

Tonight we all went upstairs to see the courtroom she will be in. It's a beautiful place.

Her husband, Jim, who has worked very hard on the campaign was relieved too. 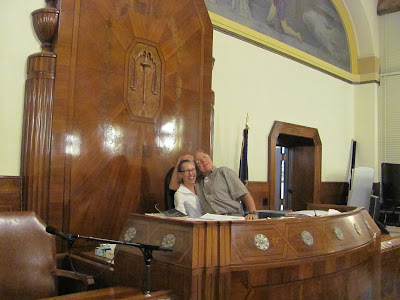 Alice, who was working in there trying to clean, but let us barge in and celebrate, was gracious enough to take a photo of all of us.

I've always been honored to call Trish my friend. And I'm thrilled for her that she won this election she has worked so hard for.

Judge Trish Rose. It has a nice ring to it.

This is her new office.

Trish will do a great job! She is a very calm, fair woman.
Congratulations!