Billy Dean Performs in Hutchinson at The W

Saturday night Greg and I went to see Billy Dean perform at The W in downtown Hutchinson. I went into the concert liking him, and left a major fan.

The W is a small venue that brings in a variety of performers, including major artists like Billy Dean. Something I'm starting to catch on to is that artists who perform in these environments are really, really talented. They don't need a whole crew of people to make them sound good.

Billy Dean walked onto the stage and kept us spell-bound for the next couple of hours. Frankly, I don't know how long he performed, but it was a while. However, I could have listened to him for a few more hours.

It's amazing to think one man, with one guitar and one microphone, could entertain us so well for so long. And I got the feeling if it had gone on all weekend I would have still wanted more. 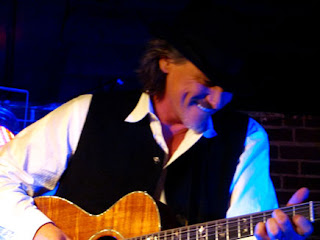 He mentioned at one point that musicians work hard on lyrics and playing and singing and then it gets lost in a big venue so he liked being in this sort of place. I realized there are lots of artists who could not manage a small venue because they don't have the talent to hold the attention of a crowd without all the trappings that come with a big stage show.

Afterwards he signed autographs, posed for photos and was just generally incredibly charming. It was an really fun night.

he was really great in concert and very pleasant afterwards... nice evening

Patsy - thanks for the great review and photos - hope to see you again sometime down the road.
-billy

I was there, HE WAS AWESOME!! What a gifted, talented man. Patsy, your blog said it exactly right! Great photos! Thanks again, Billy, for an amazing night.

I hope you'll be back at The W again. I'll certainly be there if you are... and who knows where else our paths might cross. I'm sure you were tired after playing and singing for so long, but I appreciated your willingness to sign and pose for photos. It makes for happy fans!

Lucas, he was indeed! Great show and a great experience all around.

He was great! My family and I drove from OK to see him that night too. We were ranting and raving about how great he was on the guitar and his singing of course!

You summed up an incredible evening and we are lucky The W continues to book great performers. Also you got a nice picture with Billy which I'm still working on looking less star struck in mine :)

Thanks! It was great he was so easy-going about photos.