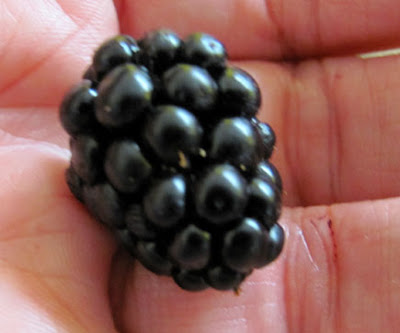 Friday is trash day. They come early - usually before 7. It was raining Thursday night, and I was exhausted from doing Third Thursday, so I got up early to put the trash out this morning.

I was rewarded for my efforts.

Not because the trash was out of the house, but because as I was headed back inside it occurred to me to check the blackberry bushes. I didn't expect them to have any ripe berries this early, but I was greeted with multiple plump, juicy blackberries.

Suddenly breakfast was taken care of. Although I didn't have any cream in the house, I was able to make do with milk. 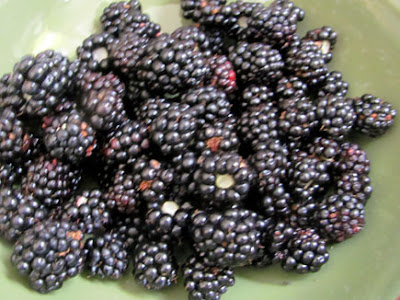 Considering how many times I planted blackberry bushes before I got them to grow, and the amount of care I've given them, and the fact that I got a few last year, I figure the cost per berry is now down to around $3.19.

Have I ever mentioned blackberries are my favorite fruit?

They always remind me of Mama, who would pick them fresh for me when I went to Kentucky at the end of June for a family reunion. They'd just be getting ripe and she would gather them and prepare them for me as a treat. I'll never taste one sweeter than one picked by Mama.

They also remind me of a former boyfriend who, in one of his best moments during our five year relationship, went out of his way to bring me fresh blackberries because he remembered I mentioned I loved them.

Okay... that's it for me for tonight... I had planned to put up some photos of art work from last night's Third Thursday, but it will have to wait for another night.
Posted by Patsy Terrell at 1:05 AM

Blackberries are to you what raspberries are to me. Absolutely a taste of heaven. Enjoy the fruits of you labor. $3.19 a berry and cheap at the price.

I have a raspberry bush too... even though it has been in longer it isn't really producing yet. I'll keep you posted!