Lessons Come in All Forms - Including Designer Handbags 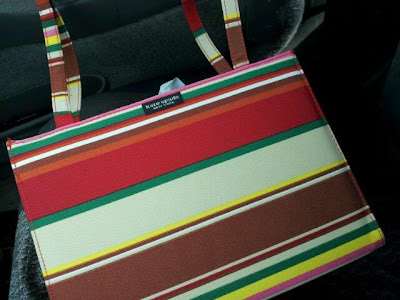 In my usual rounds of the thrift stores today I ran across this little beauty. I was instantly attracted to its cool retro stripe vibe. When I picked it up I saw the "Kate Spade" tag. I own no designer anythings, but even I know Kate Spade handbags are a big deal.

So, $8 later I walked out with my great purchase. I put a photo on Facebook, to share my happiness, still loving its stripey goodness.

A few hours afterward, I carried it to dinner. And I discovered something either I had instinctively known but ignored, or that I had never known - I'm not cut out for this. I can't handle the pressure.

My purses come from Target or Kohl's, cost less than $30 - preferably much less - and can withstand some abuse. I carry everything from magazines to cans of pop in my purse. Ink pens rattle around with notebooks. Rechargeable batteries and coins make the purses heavier than they need to be.

One can't toss around a Kate Spade handbag. It's just wrong. It's not that I have much money invested in it, but it's that someone, some where, would love to have it and it's wrong for me to ruin it with my less-than-sophisticated ways.

I want to be the sort of woman who carries designer bags. That would imply a sense of style. Unfortunately, I am not that sort of woman. And my "style" is a gaudy costume jewelry pin on a $20 blouse with some jeans. I'm not exactly the designer handbag type.

And I'd best do it quickly before I let an ink pen explode in it, spill hand lotion on it, or splatter it with barbecue sauce at Roy's.

Update: My friend, Deb, loves Kate Spade and will be the recipient of the bag. When I offered it to her, she mentioned she even has some extra Kate Spade dust bags. The fact that I don't even know what that is further illustrates that the bag belongs with her instead of with me. If it were a puppy, PETA would have wrested it from me long before now!
-----
Connect with me on Facebook, Twitter or Pinterest
Posted by Patsy Terrell at 11:46 PM

If you really like it, you should keep it. And don't feel uncomfortable with it - it's yours to do whatever you wish - and if that means spilling the occasional bit of ink or barbecue sauce on it, then so be it. Just enjoy it for what it is and the fact that it probably goes great with jeans and a shirt anyway ... or anything else, for that matter.

I am passing it on to a friend who loves Kate Spade and even has extra dust bags. I didn't even know there was such a thing. :)