Lounging with Lanna Lee - I hope I didn't embarrass myself 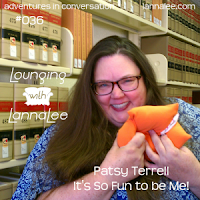 A couple of weeks ago, I made a new friend - Lanna Lee, from Maine. She was in Hutchinson for the State of Now Smalltown Conference and we spent a little time together. A few things happened as a result.

1. I started seriously considering coloring my hair. Yes, I know, you listened to me whine about the gray hair until I finally bought some hair dye. Then I let it sit in the cabinet for four years without doing anything, except whining more about gray hair. But, that's not the kind of color I'm thinking of. Lanna has shocking pink hair! It is fabulous! I'm not sure I can rock it like she does, and I'm certain I don't have the guts to go all pink. But, I'm thinking I may add a little color to the ends. Then if I hate it I can cut if off. I know - no commitment - I'm weak in such matters. Lets just say I've become somewhat familiar with the splat and manic panic websites and leave it at that. However, there is no hair dye in my home at the moment.

2. I was a guest on her podcast, appropriately named, "Lounging with Lanna Lee." Generally they're about 30 minutes long. I talked about twice that long. Imagine that - me being verbose. She was kind enough to let me ramble. It was so much fun I forgot we were doing something that would be out there for the world to hear. But, now it is.  Frankly, I'm too terrified to listen to it. Goodness knows what I said. I was just talking. And then talking some more. And then some more. Lanna was just too kind to say, "uh... yeah... right... well, thanks so much..." Regardless, it's out there - now available. I'm just going to hope I didn't embarrass myself.

Listen here if you so desire:


3. Lanna reminded me how much I love interviewing people, and rambling on myself. Makes me think about reviving my old podcast. Who knows what might happen... I certainly didn't know I'd end up talking about everything from visioning retreats to my mother's death with someone I barely knew, to let people I've never even met listen in. But I did. And heaven help me, I found it fun.

In that photo above that Lanna took that I shamelessly "borrowed" from her website, you can see the ADORABLE little couch you get as a gift for being on the podcast. And, she makes them herself. Love it!