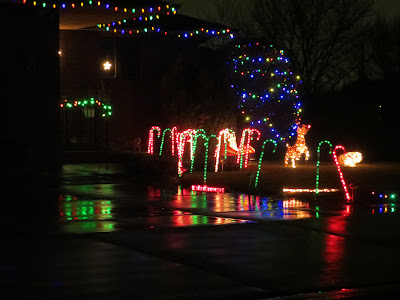 Tonight we had our first snow fall of the season. It has been warm enough the ground was just wet and provided wonderful reflections of Christmas lights and Rudolph's nose!

Earlier today I got to go play Secret Santa again, paying off layway at K-Mart for some folks. I just put a note out on Facebook and people contributed $750. I wrote a full accounting of the process on Facebook, but it was a really wonderful way to spend a little time during the holiday season.

I love the idea of people getting a call that their layaway has been paid off.

Our youngest contributor was 9, our oldest was 81. Including my own small donation, There were 22 people from 5 different states who shared. Some of these are folks I've never even met face to face, but know through social media.

Today we purchased coats, shoes, jeans, sweaters, gloves and thermal underwear. They also bought a Barbie, some Teenage Mutant Ninja Turtles, an Easy Bake Oven and a tricycle. There were many toys and many more practical things. Some of these accounts were delinquent, with only a few days left until Christmas.

People were so generous that we went through the entire list K-Mart had pulled out for good potentials. We paid all of those with the exception of one that had nearly $300 left on it. Ruth and Evan who were helping us went and found some more by looking at what was set aside upstairs and then looking them up on the computer. I chipped in a few dollars extra and we ended up spending $761.68 total. We have to leave a penny on them so people stay in the system. I left cash to pay off those extra pennies.

We paid off for 13 people. I had to do the last couple in cash because we set off a security warning on my debit card after 10 transactions in a short amount of time. :) One sneaked through because it didn't decline it until 12. But, I had anticipated that might be a problem, so I had come prepared with cash, too.

The final bonus of the day was when I called my credit union to make sure the card was still functional, they were very helpful, but puzzled by so many transactions in such a short time at the same place. Shen I explained the deal to the woman I was talking to she thanked me for being so generous. I assured her it wasn't me, but my friends who were so generous. She said that story had made her night.

Friends give me a tremendous gift of letting me play Secret Santa. This is the second year we've done it. There's nothing like that to make a person feel festive!