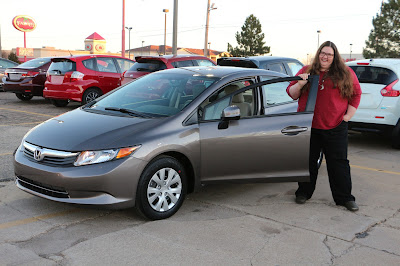 I have a new car. I didn't really want to get a new car, but learned before Christmas that my car really shouldn't be driven at highway speeds anymore. So, I had to do something.

I rented a car for the trip to Kentucky for Christmas and did some shopping around there and online. I even went to Nashville to drive a Smart Car. They're so darned cute and I really liked it. But, they're only rated at 40 mpg and the Honda Civic is 39 mpg.

In fact, it seemed all roads keep leading me back to the 2012 Honda Civic. I didn't start out to get that particular car but it just kept coming up. So, I now have one.

Before Christmas they were offering lease deals on these that were really appealing, with about $2,000 down and about $200 a month. But a local dealer was wanting to get the 2012s off their lot so much that they offered the same deal minus the $2,000 down. After much research, and talking to other companies, no one could beat the deal they were offering, so Wednesday afternoon we did the deal.

Greg went with me so he could drive the other car back for me (and of course take photographs!). The car is so old and has so many miles they couldn't offer me anything substantial in trade on it. It would be a great car for a high school kid who just needed to get to and from school or something similar. Maybe the perfect solution will come along. I'm thinking maybe I'll donate it if nothing else comes up.

Anyway, I'm very happy to have this decision done for the moment. It was taking up way too much of my mental energy thinking about this for the last month. It's done for now!

Posted by Patsy Terrell at 3:47 AM

You look good; the car looks good. Thank you to Greg for the documentation.

Congratulations on the new addition.

Thanks, Greg says I have an "action" pose going on... I think I was just about to take a step but lets go with his assessment!