I have had this ready to post for a few weeks, but was waiting for the perfect time. This seems like it. I didn't want to post it at Veteran's Day, or on Thanksgiving, or at Christmas, because this story is about an average day of being a soldier. But, now, as we've just celebrated Thanksgiving - and before we get caught up in the Christmas rush - seems like the right time. It seems we may not even realize all we have to be thankful for.

This is a soldier's story - from PFC Logan Gates, serving in the US Army.

He is 19 years old, and has been in the Army since June 2009. He has been serving in Afghanistan since June of 2010. His squadron works directly with the Afghan National Police (ANP), patrolling and doing missions with them. Usually, two or three American officers are stationed with an ANP squad, but this is the first time the two governments have paired entire squads to work side by side.

He shared this with his mom, Kelly Hutchinson, and said she could share it with some friends. When I read it I asked permission to share it here because I think it's such a wonderful insight into what a soldier's life is like.

He graciously agreed, even though he is not seeking publicity. It's hard to imagine being under the kind of stress described here. I don't know Logan, but he is obviously an extraordinary young man.

The words of PFC Logan Gates: 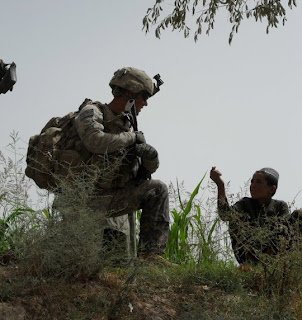 It has been a very busy week. A lot of walking, a lot of sitting around, and not much sleep. I have to say, my opinion on the people here has been changing a lot lately. I put aside my original assumptions and generalizations and started listening to them more, and with my Lieutenient I've been working with the police (Afghan National Police) more now and that helps.

I used to watch the police more than I looked ahead, trying to spot enemies. That lack of trust is gone for the most part, and I see them as equals - allies. They want the same thing we want they just don't have the tools or the knowledge, and I see that now.

There's so many things that happen here on a day to day basis that I will never remember, or be able to tell you about, that change my opinion, attitude, and whole perspective on life. I'll give an example that happened earlier this week.

I was up on a second story building, on a narrow ledge, providing security for our guys down below who were searching a building. I was standing in front of a door that seemed to be abandoned so I was surprised when a man (civilian Afghani) came up behind me and started opening the door.

He obviously had my attention and it would be a mistake on my part not to keep an eye on him, so I did. He stayed in my view but it was dark in the room, I saw him bend over and pick something up. I had to obey the rules so I didn't blow him away right at first, although it's what I wanted to do.

He stayed in the shadow as he worked his way back towards the door. By this time, my heart was pounding out of my chest and I expected the worst. I couldn't see him and by this time I had a fellow soldier paying attention to the situation too.

When he got to the door he had a couple pomegranates, some bread, and a big smile on his face. It's hard to explain the relief at the end of a situation like that. 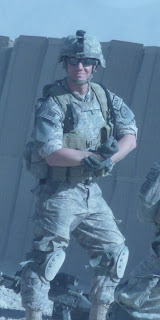 I'm sorry I had to tell the story like that but you have to understand that in a situation like that, it seems to go in slow motion. Point of the story is, my initial thought was not only wrong, but quite the opposite, of the man's intention. He was more than happy to see American soldiers outside of his house and wanted to show his appreciation.

Last night I spent the night on a hilltop in the middle of the freezing desert. Most everyone near me had gone to sleep and I was staring at the sky. In the distance I heard a loud boom, like thunder. It was artillery - 155 mm's. I heard it ripping through the sky. It exploded over my head and was an illumination round, a round with the whole purpose of lighting up the sky. They were shot for us, to protect us from anything that might be moving through the night to raise hell against us.

Two more of these came and then a third. It sounded different and I knew it was. Illumination rounds stop in midair and explode, lighting up the sky. This one didn't. It continued to scream over my head and into a mountain nearby where it exploded with a loud thud. The whole point of this show was to flex our arm and let them know that we were there, and not to be messed with.