This is Greg, again. Of course, the big news was that Patsy's tumor was benign, but other stuff happened yesterday, including some visitors.

The cafeteria at Via Christi actually supplies respectable eats at about 2/3 the price such dishes would cost in a typical restaurant. This is part of the dining area.

Sharon wore a blue velour shirt that makes her look much like a costume from the first or second pilot shows of Star Trek. 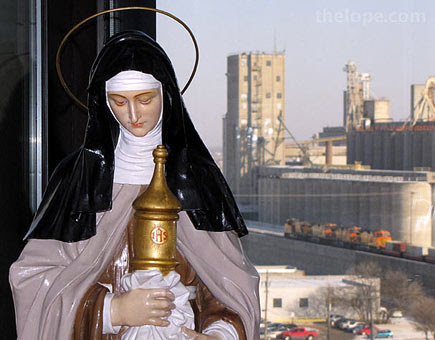 A statue of St Clare of Assisi (1194-1253) stands by a window on the 8th floor near Patsy's room. St Clare is the patron saint of television. Her bones are on display at her shrine in Santa Chiara, Italy. Note the train in the background.

(Note added by Greg on 2-7-09: St Clare was an inspiration to Mother Frances Streitel, who founded the Sisters of the Sorrowful Mother, who in turn, according to the Via Cristi website, took charge of St Francis Hospital in the late 19th century. St Francis later became part of the Via Christi system.)

Although Via Christi as a whole is architecturally too new-ish for me, there is a bit of older character in this doorway near the northwest corner. It is part of a late 1920s addition made to St Francis Hospital.

This is another detail from the 1920s building.

I arrived back at the hospital to find Jocelyn Woodson, who visited for several hours. Patsy and I helped her with some website difficulties.

Patsy takes one of her first "walks around the block" with student nurse Dorcas assisting. Patsy tells me Dorcas is from Kenya and has lived in Wichita about four years now.

Martha Slater-Ferrell showed up later in the afternoon bearing flowers and a candy-carrying Woodstock sent by "CHICKS", a small group of Hutchinson women that Martha and Patsy are a part of. I don't know what CHICKS does, but I suspect them to be part of a shadowy underground city government, manipulating local politics with subtle machinations which...Oh..uh. Forget what I said about CHICKS. Nothing to see here. Move on.

Christy, an RN, gave Patsy a shot of heparin, a blood thinner. The flowers are from Mark Reddig.

Patsy was on her cell phone as the shot was given. For some reason that struck me as funny. She told me later she was talking to her great nephew, Bobby Clark. She assumed he was calling because he had gotten the message the tumor was benign, but he hadn't heard yet. When Patsy went to call her family she couldn't reach anyone because Kentucky is iced in. No one has any power there. She reached her nephew, Jackie, on his cell phone, and let him dispense the news on that end. A short while later she heard from BC and assumed that was why. How cool that it was just happenstance he called that night.

In the evening, the good news about the tumor being benign arrived.

What was supposed to be a relaxed night of savoring the news turned rather active. Late Wednesday night, Patsy's atrial fibrillation acted up. Dr Horbelt had advised her to tell someone if the A-fib acted up as it could lead to a clot.

After messages were passed between various medical personel, including Dr Dory (above), she was tested for pulmonary embolism via a CT scan and was found to have none. At about 2 AM she was settled back in her room.
Posted by Patsy Terrell at 8:57 AM