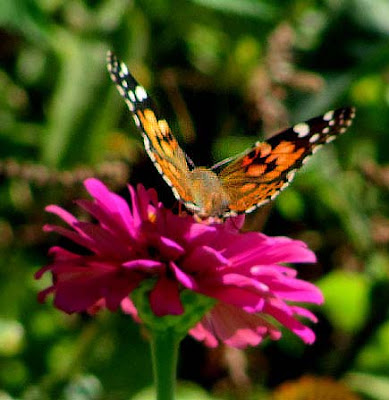 Occasionally I see my fellow human beings treat each other with extraordinary kindness. I've been privledged to see it a few times recently.

On Saturdays one of my regular stops is The Et Cetera shop, run by the Mennonite Central Committee with fair trade items from around the world and thrift items, too. I'm always on the hunt for items for art, as well as dishes that might strike my fancy.

When I went in a few weeks ago, there was an elderly gentleman at the counter, talking to the clerks about a hat. I was checking the auction items with my back to them but the man wanted them to hold the hat for him until Monday when he'd have the money to buy it.

They were trying to explain they couldn't hold it for him, but he was so hard of hearing he wasn't grasping what they were saying. Another man nearby was trying to help him understand, and that on Monday it would be on sale for half price and only cost $2.50, if it were still there.

I was trying to figure out how to just buy the hat for him, and not embarrass him. While I was thinking this through, with my back still to the whole situation, another woman came from somewhere else in the store and said, "I'm buying him the hat." She paid for it and they explained she was buying it for him. He was thrilled and thanked her. He told her, "I wouldn't have the money until next week." She hugged him and said, "Well, I've got the $5 now. I'm happy to do it. Enjoy your hat."

I went on about my business and headed upstairs to check out the goodies. I was reminded of one of my rules for living - "it's almost always wrong to do nothing."

I did nothing. The other woman took action. The older man was pleased. The rest of us were humbled. It's good to be humbled by witnessing kindness like that.

Last week during Coffee at the Cosmo presentation there was a gentleman attending who was blind. The woman with him - I assume his wife - was assisting him.

During the coffee I'm very busy setting up and managing the food and coffee set up, welcoming people and saying goodbye when they leave. People have an opportunity to get a close-up look at the artifacs after the presentation. Often by the time I'm done with the food and coffee, they're packing things up. But on Thursday there was a mom and a couple of young kids still looking, as well as this older couple.

I went over to get some photos of the collections person talking to the kids about artifacts. It was then that I noticed the CEO, who had done the presentation, had given the gentleman who couldn't see the white gloves we all use when we touch artifcts. The CEO was taking time to pick up different artifacts and letting this man touch them so he could understand them better.

My grandmother was blind, so I know how meaningful that was. It was an amazing kindness to take the extra time, letting this gentleman experience different artifacts. I was touched, and very impressed with Chris, the CEO. It feels good to work for an organization headed by a CEO who shows kindness like that.

Earlier this week I made a call to Westlake Ace Hardware here to ask advice about my weedeater, which seemed to be out of string. The gentleman I spoke with, Larry, said to bring it down and he would show me how to string it. Turned out it was just kinked, and didn't even need string. He showed me how to wind it at no cost.

Was that good business? Absolutely. But it was also a kindness he didn't have to show.

I shop that store regularly, anyway, but he had no way to know that when I called. He was just being kind because it's his nature. What a lovely thing - to be naturally kind.

A couple of months ago I was on the road to visit my family in Kentucky. I'd had the car checked out before leaving. When I stopped in Beaumont, Kansas, I noticed the car was leaking antifreeze. I'd had the water pump replaced, so didn't think there was a problem, but couldn't figure it out.

I raised the hood and was looking at things, as if I'd know something about what I was seeing. The one thing I was able to determine was that it seemed to be coming from the reservoir.

While I was debating what to do, the woman who was there to clean the rest stop, came over and asked what the problem was. I explained and she got on her phone and called her boss, who came over with her husband, to look at my car. They also called a local guy who works on cars, but he didn't answer.

This man looked at it and said he thought it was the cap on the reservoir. He worked with it a little bit and assured me I would be okay. He was absolutely correct. Apparently it was just a little grain of something that had prevented a good seal.

I was astonished at the incredible kindness of all these folks. The couple that came from their home were not upset they had been called as they were getting ready for dinner. They were cheerful and pleasant and eager to help. The woman who was there to clean wasn't thinking that it wasn't her job to help a motorist. She was being kind to someone she had never seen before and maybe wouldn't ever see again.

I'm so thankful to all of them.

Kindess, embodied in good hearted souls who go beyond what's expected, with nothing but good cheer, is a miracle we too often take for granted.
Posted by Patsy Terrell at 10:56 PM

Beautiful stories, I am so glad you shared them.

It says a lot about you that you noticed the kindness, so many people are so busy looking for what is 'wrong' that they don't notice what is 'right'. :-)

Thanks, Susannah... I debated if that was just too long and wordy, but all of those people made me smile deep into my soul by their extraordinary kindnesses. I try to take note of the good things happening around us.

Cut yourself some slack on the hat guy, kiddo. Your intentions were good. You were busy looking for a way to help him without wounding his pride. You just hadn't come up with it yet before the other lady spoke up.

It was good just to witness it... a lovely moment.