A few weeks ago in Joplin, Greg, his girlfriend Mia, his mom, and I were out to lunch and Greg and I happened to be sitting next to each other. We were joking around about something and his girlfriend took this photo of us. We were amused by our over-the-top, Up With People, we could be backup singers for the Andy Williams Christmas show, smiling faces.

Frankly, Greg and I might have been more amused than anyone else. Regardless, Greg promptly put it on his mom's computer as a screen saver as soon as we got back.

I offered to take a similar picture of Greg and Mia, but for reasons that remain a mystery she shuddered a bit and, seemingly unconsciously, violently shook her head, before regaining her composure and saying sweetly, "Oh, no, that's okay." I assured her it was no bother at all and I'd be happy to do it. After more involuntary shuddering she held up her hand as if to deflect any further suggestion and said more firmly, "No, really, that's okay." I let it drop. It seemed prudent.

Okay, in reality, I'm not sure his mom knows how to change the screen saver back to the cat, but that's incidental. Had she said to change it back Greg would have. So, Greg and I are feeling pretty proud of ourselves. WE BUMPED THE CAT!

I had forgotten about the photo and haven't been back to Joplin since then. The other night Greg sent me this updated one. His brother, Steve, is there and Steve added his own notes to the screen. Apparently, he is less amused than Greg and I were. I have decided he's grumpy.

Maybe what we really need is a similar picture of Steve and Mia... 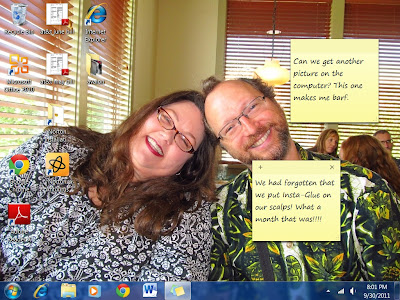 Greg and I have been friend a really long time. And we easily amuse ourselves - perhaps no one else - but ourselves.

I love your smile! Makes me happy whenever I think about it.