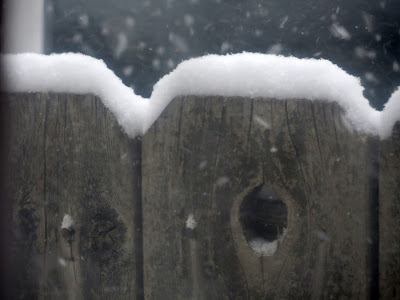 “The snow began to fall again, drifting against the windows, politely begging entrance and then falling with disappointment to the ground."
- Jamie McGuire in Beautiful Disaster


We are in the midst of a major storm. Well, I suppose by now we are at the end of it. The snow has stopped. In Hutchinson where I live it is currently 16 degrees and we have about 16 inches of snow on the ground. I suppose this is appropriate.

I took this photo out my office window yesterday as it was just getting started. This morning I took the one below. 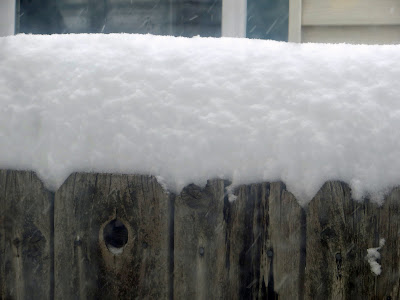 This is in a very protected area between my house and my neighbor's house, which is why it hasn't blown off. The snow stopped after dark tonight so I didn't get a final shot, but it doesn't tell the whole story because there's a limit to how much will stay in place.

The car tells another part of the story. 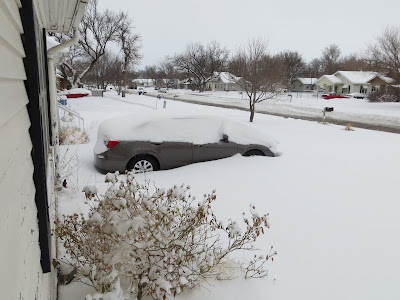 Yes, that lump is the car.

I have not been out of my house since early yesterday when I went outside and turned the car around so it was facing out of the driveway, and parked near the sidewalk. I learned that lesson the hard way a few years ago when we had almost two feet of snow. That was in late March and it was a bit of a fluke. We've not had much snow the last couple of years and I have to say I have missed it.

Snow is really beautiful and the last couple of days have been lovely. We even had thunder-snow early the morning. I didn't go to bed until about 4 a.m. because I was watching it snow. Stunningly beautiful.

Although I was already incredibly thankful to be able to work from home, I have been reminded further how delightful it is to be able to work in my home office and not have to go out on days like this. On the downside, I will miss having lunch with Trish tomorrow, but I can't imagine I'll be able to get out of my driveway.

I live on a major street, and it's always a bit ironic that the street will be pretty clear, but those of us who live on it can't get to it. The plows will have piled feet of snow at the ends of our driveways and packed it down quite thoroughly. So, unless we have the superhuman strength to hack through the packed down frozen and refrozen mini-mountains at the end of each drive we are stuck until things clear a bit.

Fortunately, we had plenty of warning this was coming, and I went and grocery shopped a few days ago, so I have plenty of things in the cupboards. Actually, I do at almost anytime, but am even more prepared at the moment. I am getting ready to enjoy someone's cooking other than my own, but I don't think that will be tomorrow. The high is supposed to be around 25 so I imagine most of this will still be with us at dusk tomorrow. We will get up to the freezing mark on Saturday, but there's a possibility for more snow on Sunday. Whatever will be, will be. As long as we keep power, I'm in good shape!

It was an absolutely beautiful snowfall. Just gorgeous. And I'm so thankful to be able to enjoy the falling snow from a warm house, and not need to worry about getting to another office. I am blessed.

I'm going to post a couple of photos that show the progression, just for your amusement. 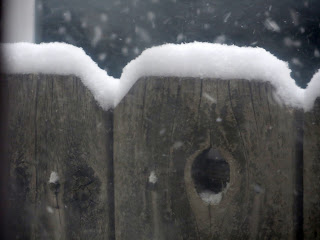 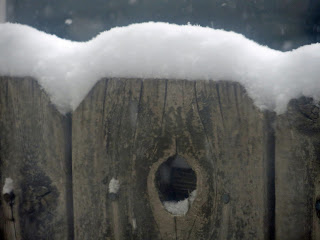 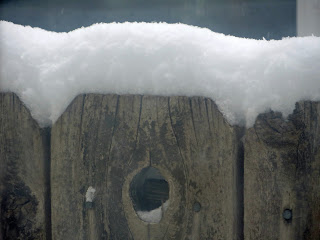 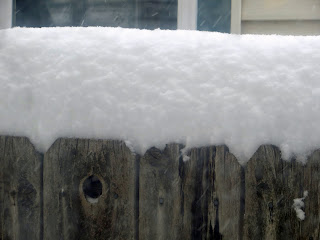 They're calling it the Blizzard of Oz, and that seems a nice moniker. It has been a wonderful experience, but I'm guessing after another day of it, we're going to be getting a bit weary of not having a change of scenery. I haven't been any further than my front porch. 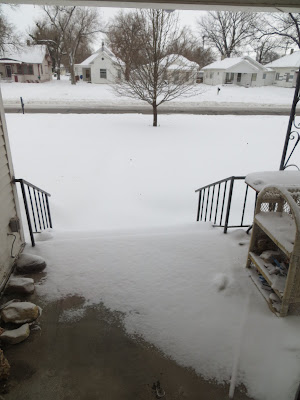 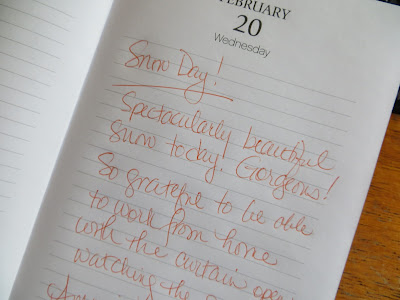